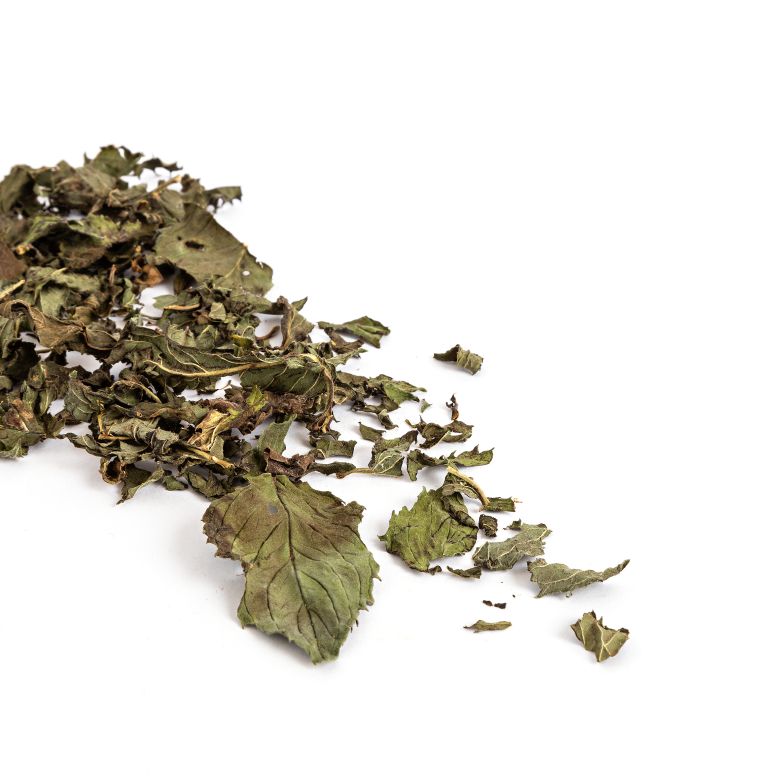 Peppermint has been used for thousands of years for its healing and health properties and archaeological evidence points to its use as a medicine as long ago as ten thousand years! It was used and cultivated by the Egyptians and indeed dried peppermint leaves have been found in several ancient pyramids. Mint is mentioned in the Bible as one of the herbs that was used to pay taxes. In Greece and Rome mint was used to flavour foods and wines, as a  decoration for tables and played a special part in festivals.

In Greek mythology the creation story of mint is explained as Hades fell in love with Minthe, a river nymph, but upon Persephone (Hades wife), finding Hades seducing Minthe, Persiphone turned Minthe in to a lowly mint plant! Hades could not reverse the spell so instead he made it that as Minthe was walked upon a beautiful,sweet smell was released and thereby Minthe would never be forgotten and her presence always recognised.

It was probably the mid 1700's when peppermint became popular for its culinary and medicinal uses in Europe and especially Britain. A district around Mitchum in Surrey became the centre for mint growing and production increased from only a few acres in the 1750's to over 500 acres a century later.Peppermint farms now flourish around the World including France and Poland.

Peppermint ( mentha piperita), is a natural hybrid cross between water mint (mentha aquatic), and speamint ( mentha spicata). It thrives in moist rich conditions especially next to streams and rivers and because it is a hybrid and does not produce seeds it proliferates by spreading its roots locally. In some areas of the World it is seen as an invasive plant because of its ability to spread. July and August are the flowering months for peppermint and it produces lovely dense clusters of tiny purple flowers that form spikes from the upper leaves.

A volatile oil is produced from the peppermint plant and is the third most used oil in the world after lemon and orange. It is loaded with menthol which gives the infusion its wonderful cooling, refreshing taste. There are many species of mint in the world, in fact over 210, but the oil from peppermint is considered to be the best.

Peppermint has many purported health benefits including used as a decongestant when taken as an infusion or inhaled over a steam bath infused with peppermint leaves.

It can act as local pain reliever applied to the skin and a poultice of peppermint leaves may relieve aches and pains when placed on a painful spot.

An infusion of peppermint can relieve travel sickness as it acts upon the nerve endings of the stomach which may help to ease nausea.

Peppermint has been used for centuries as a mouth gargle to freshen the breath and because it is both an antiseptic and anesthetic it is great for toothache. Make up a small bag of wet peppermint leaves and apply to the aggravated spot.

Sipping a warm infusion of peppermint leaves is known for its ability to relieve stomach cramps, flatulence and bloating.

Peppermint is truly a versatile herb. Not only does peppermint taste great and has been cited as having many health properties it is fabulous used to mix and blend with other infusions. Try blending with lemon verbena or camomile for a power house of calmative properties or take a look at our peppermint and liquorice infusion for a soothing drink. It's also great as an iced infusion for hot summer days.

The pure, whole dried peppermint leaves are a browny green colour with a lovely rich aroma of mint. Once steeped the leaves return to a rich green colour and produce a pale golden infusion with an appetising aroma and taste of peppermint. On sipping the palate is left with a lingering taste which is refreshingly minty but not overpowering. The whole peppermint leaves are entirely natural and have nothing added to them.

As peppermint has such a refreshing and invigorating taste I would recommend it is drunk after food rather than with it. Peppermint is renowned for its ability to aid digestion so it is perfect to sip after a meal.

Brew using a tea infuser or teapot and strainer.