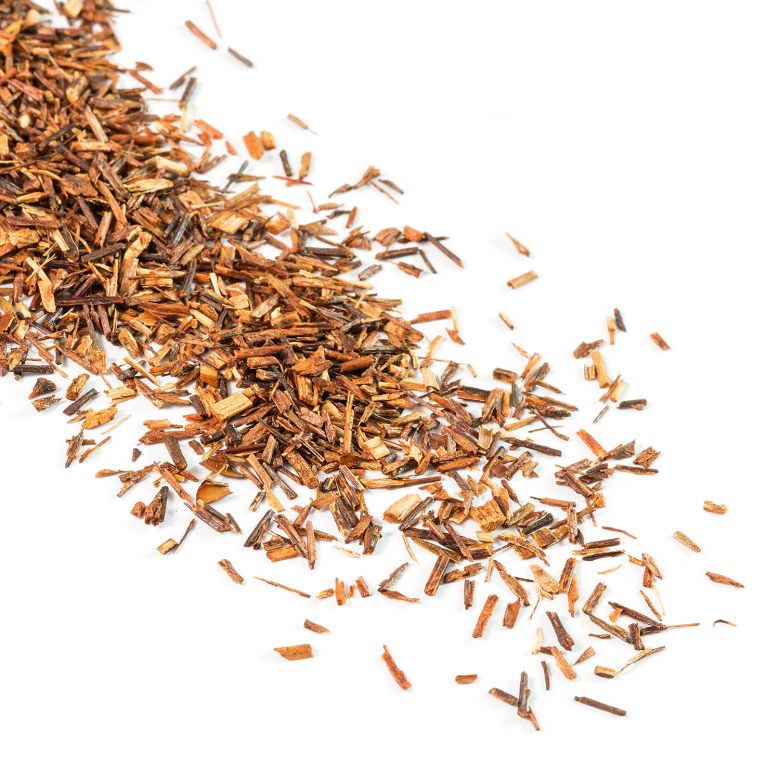 Rooibos( Afrikaans for "red bush"), is the national drink of South Africa where it is served much like a black tea (camellia sinensis), with milk and sugar or lemon slices.

Rooibos is made from the bushy shrub, aspalathus linearis, and grows in a small area in the Cedarberg Mountains, north of Cape Town, South Africa. The region where it grows is known as the fynbos ( meaning fine bush referencing the type of slender leafed and branched bushes that grow there), and has a large number of plants that are endemic to this area, rooibos being one.  Attempts to cultivate the shrub outside of this area have repeatedly failed and with global warming potentially upsetting the delicate balance of the fynbos sustainability questions may arise for the multi- million pound rooibos industry. The plant is now commercially farmed and is a major industry in the region.

Traditionally used by the Khoisan people the first recorded harvests collected from wild plants were by the Dutch in the 18th century. The Dutch settlers used rooibos as a substitute for tea which was both costly and had to be imported. However, the means of producing rooibos as we know it today did not take place until, in 1904, a Russian settler by the name of Benjamin Ginsberg devised a method of producing rooibos based on Keemun tea production in Anhui Province, China. By the 1930s Ginsberg had succeeded in pushing for the experimentation into the commercial cultivation of rooibos which lead to the establishment of today's rooibos plantations.

There are indeed similarities between tea(camellia sinensis), and rooibos production. Rooibos is an oxidised infusion just as black tea is an oxidsed tea, and green rooibos is unoxidised just as green tea is.

Rooibos is harvested from January to March during the South African late summer. By hand a sickle is used to cut the top third of the bush and then the leaves and thin branches are bundled and transported to the factory. Here the rooibos is cut into equal lengths, bruised and then spread out on massive courts to oxidise turning from green to a rich chestnut coloured brown. The rooibos is then allowed to dry in the sun until is collected and returned to the factory for grading and sorting and then finally pasteurised using steam.

Rooibos is caffeine free and so is ideal as a night time drink. It can be infused for a long time without becoming bitter and lends itself to blending with other ingredients, including flavourings that are traditionally used with tea leaves offering a caffeine free version of old favorites such as Earl Grey. Take a look at out Earl Grey Rooibos in our infusion collection for the Earl Grey experience without the caffeine!

A rooibos concentration is now also being used as a base for such drinks as lattes and cappuccinos to offer a caffeine free coffee style experience. It also can be served iced. It really is as versatile as your imagination!

The glossy needle like pieces of rooibos are a mixture of a deep chestnut red colour flecked with lighter golden pieces. The smell is deep and rich with a smooth nutty and sweet tobacco aroma. On brewing the infusion takes on a deep red colour with a taste that is smooth and slightly sweet with some nutty notes and a very gentle woody spiciness. Rooibos can be enjoyed with milk and sugar( as it is served in S.Africa), or it marries extremely well with orange or lemon slices.

Rooibos goes fabulously with chocolate and can be used as a flavouring in desserts and sweets. It marries incredibly well with a lot flavours especially citrus fruits. For a very interesting pairing try with nutty cheeses such as Parmesan or Wensleydale