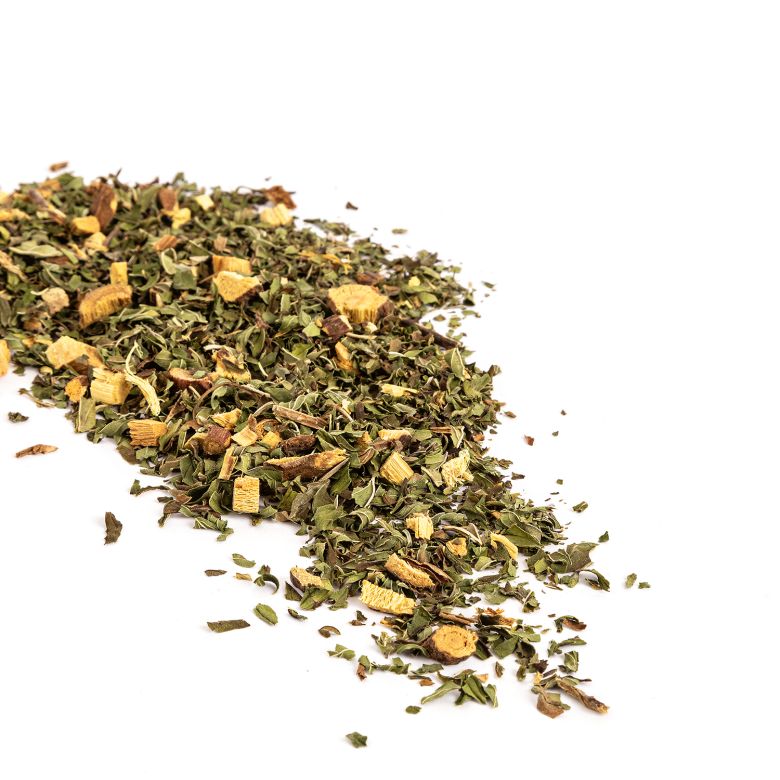 A delicious combination of two old favourites: peppermint and liquorice. The fresh, clean peppermint flavour balances beautifully with the sweet deep taste of liquorice to produce a reviving and satisfying infusion with the added bonus of many health benefits.

Peppermint has been known for thousands of years for its health and medicinal properties. It was used by the Egyptians, Greeks and Romans and is mentioned in the Bible and features in Greek mythology. Its many health benefits are cited as acting as a decongestant, easing travel sickness, used as a mouth gargle and easing stomach pains and bloating.

Liquorice is a woody perennial that can grow up to 6 feet tall and was originally native to S.E. Europe and S.W. Asia but is now grown in many warm climates around the world. Liquorice root has long been a confectionery favourite but also has many health benefits. It contains glycyrrhizin which acts like cortisone but is a natural steroid. Liquorice can be used for inflammatory pain, arthritis and allergies. Liquorice is also good for stomach problems such as indigestion and stomach ulcers.

Peppermint and Liquorice infusion not only tastes great but offers a multitude of added health benefits too!

The combination of the sweet liquorice taste and the fresh invigorating flavour of peppermint make it ideal for after meals rather than with food - especially as both ingredients have tummy soothing properties! The infusion of course can be drunk all day on its own.

Peppermint and Liquorice is a hand blended infusion, created and packed at Dorothy’s Teas. Some of the ingredients may settle and so to ensure the perfect infusion please mix thoroughly before brewing each time.

Brew using a tea infuser or teapot and strainer.