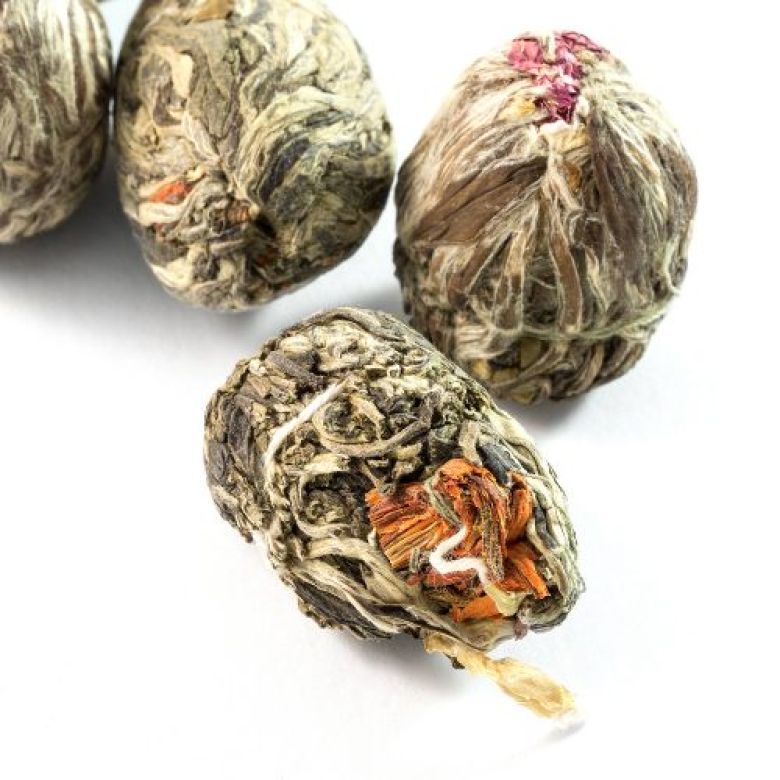 Refreshing green and white tea leaves from Fujian Province in China are meticulously hand-tied one by one and sewn into a bulb, which encapsulates flower blossoms at its heart. The final stage is firing, which holds the bulb together. When placed in hot water, the exquisite bulb of tea leaves absorbs water and gracefully unfurls to reveal a floating tower of jasmine blossoms, nestling on a bed of fiery orange chrysanthemum petals. It is unclear when blossoming teas were first created. Some authorities cite it as a centuries-old skill first devised for the Royal Courts as a visual display, rather than a tea to be drunk. However, it is more commonly believed to be a modern creation, and has now developed into a magical skill with many different types and shapes being created. Sit back, relax and watch the mesmerising tea show begin.

The artfully formed bulb of green and silvery white tea leaves has a delightful flecked appearance. On infusion, each tea leaf individually unfurls to reveal a beautiful deep orange and white flower centre, which magically bobs upwards. Each of the orange chrysanthemum petals open gracefully, then from the very centre, a garland of white jasmine blossom floats out and upwards. The aroma is grassy fresh, and the flavour is clean with delicate floral and jasmine notes. Re-infuse once more.

Best drunk by itself.

Please use a tall heat proof glass or glass teapot. 1 bulb / 250ml /95c/ 3 minutes. Repeat infusion. When pouring in the hot water, avoid pouring directly on to the bulb.