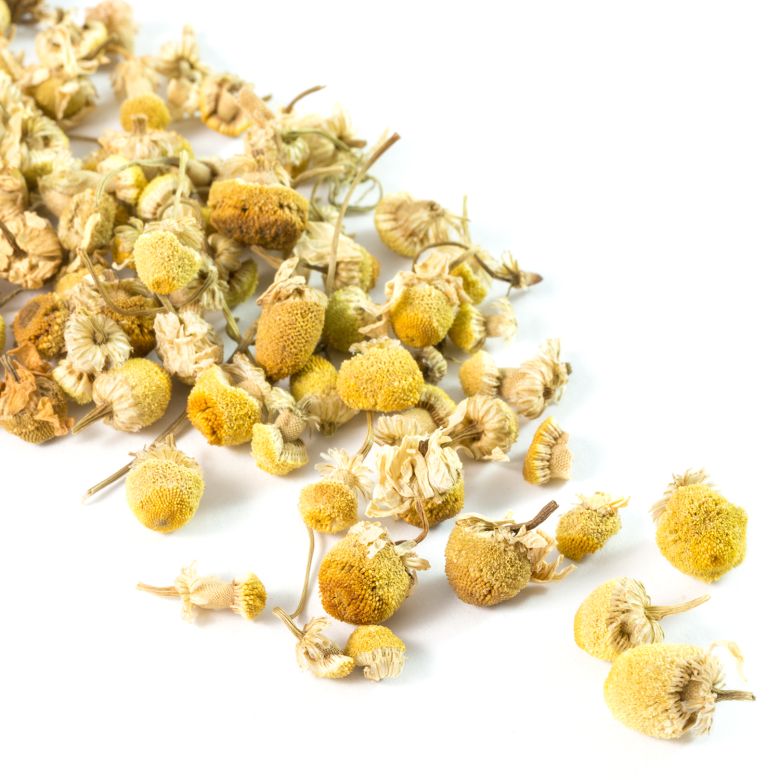 Camomile has been used and revered for milleniums for its health and healing properties.

The earliest written records of camomile date back to 1550 BC  where it is mentioned in the Ebers Papyrus of ancient Egypt. The Egyptians were already appreciating its healing and therapeutic properties and used it to treat the sick, embalm the dead and even honour their gods. Still today camomile grown in the Egyptian delta region of the Nile is considered to be the best available.

Camomile is part of the daisy family and there are many varieties of camomile but only two are used for their health benefits - Roman camomile( chaemelum nobile), and German camomile ( matricaria  chamomilla)

Roman is the type we are familiar with in Britain which grows low to the ground in lawns and along field sides and is a perennial with small daisy like flower heads. Roman camomile is often planted to create lawns which when walked upon smell of crisp apples. It has a more bitter taste than the German camomile.

German camomile is the type we sell at Dorothy's Teas and is an annual herb which grows upright to about 3 feet tall with  daisy like flowers with yellow conical shaped centres surrounded by white petals. It is has a sweeter flavour than the Roman variety and is deemed as the best type for its calmative and health properties.

Camomile has many benefits both topically and taken as an infusion. It is known as "The All- Round Comforter" due to its ability to relax and calm and its anti-inflammatory properties help with IBS, bloating and abdominal pain.

Topically it can be used as an hair rinse to add highlights to blond hair or as skin softener in the bath.Take a camomile bath by placing 4 tsps of camomile in a bag or tea bags, sit back relax and feel how the camomile relaxes the tension in your muscles and softens your skin. A wash of cold camomile infusion is great for soothing scalds and burns due to its antiseptic and antibacterial properties.

Taken at bedtime an infusion of camomile will calm and relax or try blending with other infusions such as lemon balm or lemon verbena and a dash of honey for a super nightcap. It truly is "The All - Round Comforter".

On a final note you may be curious why there seems to be two ways to spell Camomile/Chamomile - with or without the h! At Dorothy's tea we spell it without as that is the more usual spelling in Britain.

The whole camomile flowers are a golden yellow colour with tiny, pale cream petals around the base. The dry infusion smells slightly sweet with woody and subtle spicy overtones. On steeping the infusion takes on a light yellow colour with a smooth and delicate apple aroma. The flavour is deliciously woody with a floral sweetness and taste reminiscent of crisp apples. Try adding honey or blend with other infusions, such as lemon verbena, for a night cap.

Traditionally drunk at night time as a relaxant camomile can be drunk on its own. However, camomile lends itself as an ingredient in many other drinks and dishes. In summer prepare a cold brew of camomile and add elderflower cordial and plenty of ice to make a refreshing and soothing drink or blend with lemon verbena for a relaxing and de-stressing night cap. Infuse in cream to prepare a delicious pannacotta or use to make honey and camomile ice cream.

Brew using a tea infuser or teapot and strainer